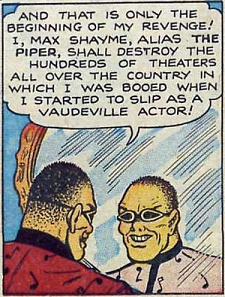 A good supervillain always practices his monologues in a mirror.

Musical supervillain from the Swing Sisson story of Quality comic book Feature Comics #52 (January 1942). He has invented a "Q-Ray" gun that temporarily paralyzes people. And plays the clarinet. And is rocking an awesome 1980s New Wave look all the way back in 1942.

His real name is Max Shayme, and he used to be a vaudeville actor until he started to slip somehow and got booed. Now seeking revenge, he takes over a movie theater, and combines his Q-Ray with the projector to paralyze the entire audience, then sets the place on fire.

Despite swing bandleader Swing Sisson and his pals' best fist-fighting efforts, The Piper gets away and the fire burns alive 1,100 paralyzed audience members. Man old comics were harsh!

Swing and his partners track The Piper and his goggled goons down, beat them up, and turn them over to the police.