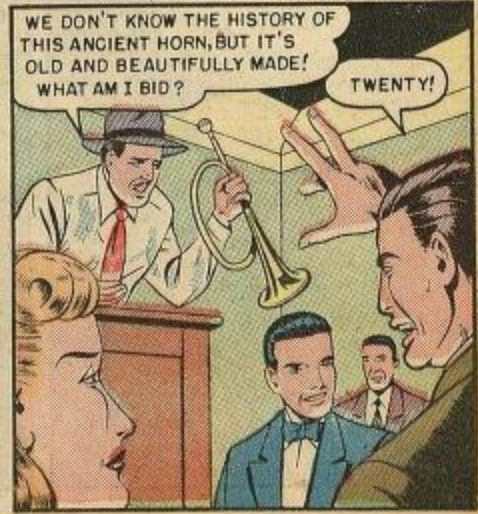 Horn with magical powers in the final adventure of swing bandleader Swing Sisson in the last issue (#144, May 1950) of comic book Feature Comics, an anthology-type comic of various funny and adventure stories.

Swing bids on the antique horn at an auction and incorporates it into a arrangement of "Trumpet at Dawn," played by bandmember Toby Tucker. But it turns out playing the horn makes metal fly out of people's hands, being especially useful in battle to disarm one's enemies, and less useful to the kitchen staff trying to cook at the Clover Club on Broadway where Sisson is playing.

Unfortunately, at the same auction, a mob boss named Rugg picked up Roland's legendary sword Durendal, which can cut through anything. Rugg and goons try to get the horn also, but end up beaten up by Sisson and pals. Sisson turns the sword and horn over to the U.S. government, who probably stuck them in the warehouse from the end of Raiders of the Lost Ark.

Roland was a real historical figure of Medieval France, whose exploits were heavily embroidered with legend and myth. In the comic, the horn is drawn as a more or less standard brass military bugle. But Roland's real horn was called an "oliphant horn," being made from an elephant's tusk. In his final battle, desperate for aid, Roland supposedly blew it so hard he died.