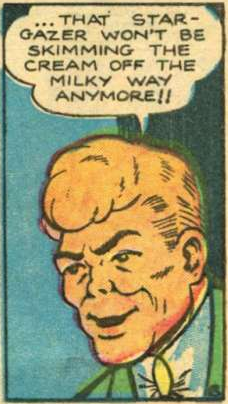 This panel makes slightly more sense when you realize he just killed a criminal astrologer.

Saxophone player for swing bandleader Swing Sisson in the comic book Feature Comics, an anthology-type comic of various funny and adventure stories. Swing, Tucker, and singer Bonnie Baxter usually stumble into conflict with organized crime but beat them up.

The band has a regular gig at Pete Jaxon's Clover Club on Broadway in New York City.

At some point in the run of the series, Toby seems to have switched from saxophone to trumpet.