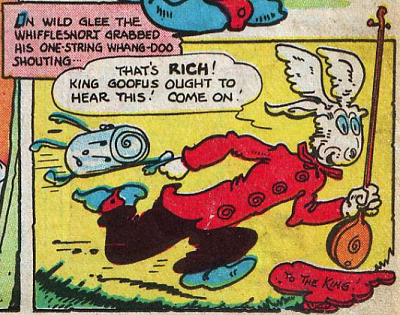 A long-necked, one-stringed instrument, similar in shape to a Greek bouzouki

It's owned, played, and perhaps invented, by musician and odd title character from "The Musical Whifflesnort and the Red-Hot Music Roll" story of Jingle Jangle Comics #23 (October 1946).

The Wifflesnort gets inspired to go play his instrument for King Goofus. Then there are some surreal shenanigans, and when he gets to the king, his Whang-Doo is busted and he can't play.

The instrument's name is likely a truncation of "whangdoodle," which, prior to being used for a fanciful creature, may have been a more general term for something, like "doohickey"

Written and drawn by George Carlson.