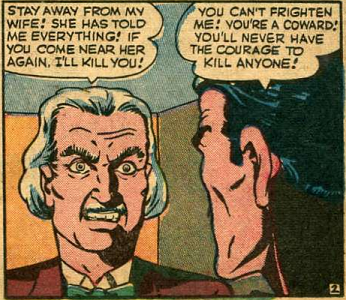 Classical conductor in the "Swing Sisson Goes to a Symphony" story of comic book Feature Comics #91 (September 1945). His wife is having an affair with an sleazy-looking, unnamed trumpeter in the orchestra. Vladousky confronts him about it right before the concert, and pulls a gun on him.

A little later, bandleader Swing Sisson, attending the concert with pals Toby Tucker and Bonnie Baxter, goes backstage and discovers Vladousky dead from a gunshot. At first it seems obvious the trumpeter did it, but then Sisson discovers Vladousky killed himself, but rigged the gun with a string and a weight to disappear down a vent after he shot himself, to make it look like the trumpeter killed him.