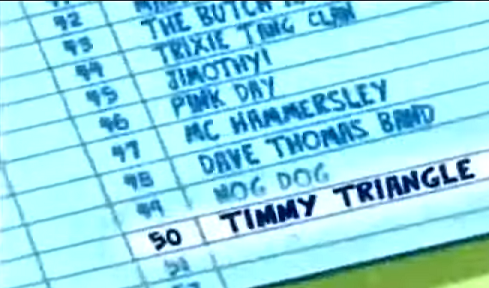 The nom de rock of The Fairly Oddparents protagonist Timmy Turner in the "One Man Banned" episode (first aired 16 Oct 2009). After he gets jealous of his father's musical success, he wishes that everyone in the world loved his triangle playing. Following a montage that makes reference to everything from the Thriller, Abbey Road, and Nevermind covers to OK Go's "Here It Goes Again" video, he becomes an Elvis-like megalomaniac jerk who refers to himself in the third person. And then lessons are learned.

At one point in the episode, we see a music chart, which includes the following bands: