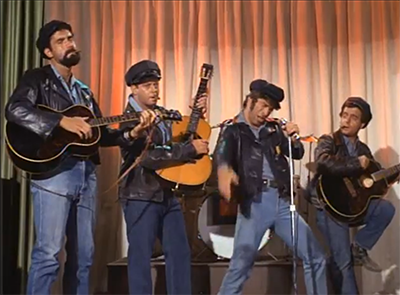 In the "Your Friendly Neighborhood Kidnappers" episode (10/3/1966) of television series The Monkees, this band's evil manager, Nick Trump (Andre Philippe), buddies up to The Monkees and peppers them with bad advice in an attempt to keep them from beating his band at an upcoming battle of the bands. He even calls in a favor from his mob friends to kidnap the Monkees the evening of the contest.

After much shenanigans, of a zany nature, the Monkees escape and make it to the contest, only for both bands to lose to Lester Crabtree and the Three Crabs. The Four Swine themselves only briefly appear in the episode, looking like Hell's Angels rejects and playing an instrumental that sounds suspiciously like some of the show's incidental music.