Lester Crabtree and the Three Crabs 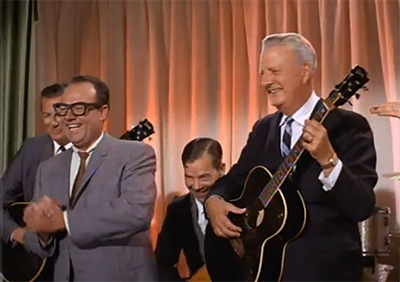 In the "Your Friendly Neighborhood Kidnappers" episode of television series The Monkees (first aired (3 Oct. 1966), this band pops up at the end to win the battle of the bands contest, making a mockery of all the efforts of The Monkees and their rivals, The Four Swine.

The genesis is when the group go to a restaurant where, on the deliberately bad advice of the Four Swines' manager, they've paid girls to run in and rip Davy Jones' clothes off. To create "buzz," dig? But the manager sabotages it, and the girls instead rip the clothes off of Lester Crabtree, a mild, middle-aged, visiting shoe salesmen.