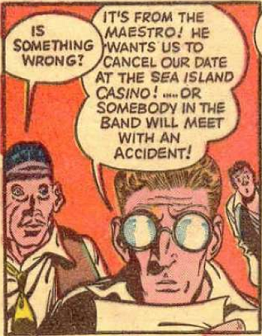 He's been blackmailed by mysterious criminal The Maestro. If he plays the Sea Island Casino gig, something will happen to one of his band members. Hero The Spirit tracks The Maestro down and beats him up. It turns out the Maestro is the drummer for Lazo's band! He wanted the gig to fail so Lazo's band would walk out on him, and the drummer could take over the band. Lazo's trumpeter, Ed, was in cahoots with The Maestro.

The Spirit's insanely racist caricature of a sidekick, Ebony White, wants to be Lazo's drummer and almost gets the chance, but is kidnapped by the Maestro.