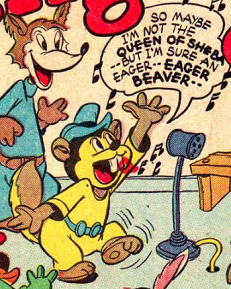 Singing, swinging beaver from the Bingo and Glum story of funny animal comic book Jingle Jangle Comics #24 (December 1946). He's having a great time playing at a house party when jealous singer Terrific Toad is such as ass to him, it makes him cry. Beeber thinks now he won't have a shot singing on an amateur hour show on Jack and Jill's radio station. Regular characters Bingo and Glum help him out by pitching a singing contest/picnic to Jack and Jill. But shenanigans at the contest lead to Terrific Toad getting stuck in ice and having to be rescued by Beeber. Terrific Toad catches a cold and can't sing, so Beeber wins.