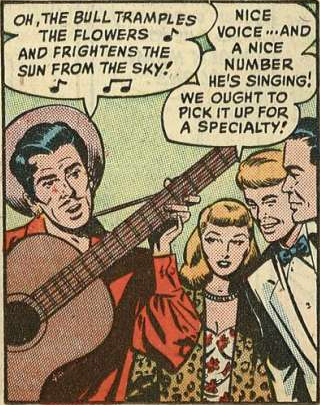 Hispanic singer/guitar player from the fictional Caribbean island nation of Flores in the Swing Sisson story of comic book Feature Comics #139 (October 1949). He sang a song ("Song of the Bull") making fun of the island's tyrant, Don Toro, and was forced to flee to New York City. Bandleader Swing Sisson tries to help him out by having him play his song in the Clover Club, but an agent of Don Toro overhears. Sensitive Don Toro is in town seeking Basil, and kidnaps him and Sisson's singer, Bonnie Baxter.