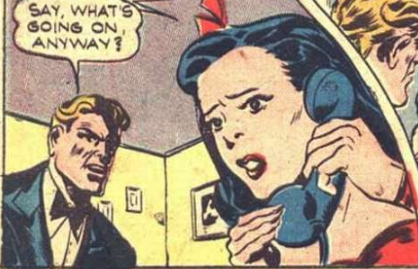 Young French opera singer whose father is the Vichy consul in Washington, in The Shield and Dusty story of comic book Pep Comics #30 (August 1942). Dad's been passing on secrets to the Americans, however, so Hitler sends ape-like Nazi torturer "Der Strangler" to assassinate Mr. Bergere. At a huge Washington opera house, Yvonne sings Irving Novick's opera La Farta Bwahahahaha! How did they get that past the editor!? Dusty develops a major crush on Yvonne, and they go to see her backstage. But she's talking on the phone to her dad, who's is murdered by Der Strangler while on the line. Der Strangler becomes the new consul, but is eventually found out and defeated by heroes The Shield and Dusty.