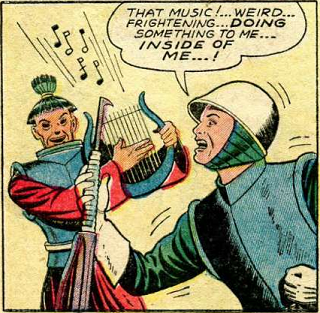 They're called feelings, you philistine. You're SUPPOSED to have feelings when you listen to music.

Weird harp-playing alien from "The Harp of Death!" sci-fi story of comic book Manhunt #7 (April 1948). Hero Space Ace, Manhunter of the 21st Century, is investigating the so-called ghost murders. He discovers they are really the work of alien flower vines that strangle their victims. Yanal's harp-playing kills the vines instantly, which are under the mental command of the last Bird Men of Jupiter, who had hoped to use them to establish a new civilization on Mars.

Then Yanal pulls off his mask to reveal he is ALSO a Bird Man of Jupiter, and willing to consign his species to extinction for its crimes.