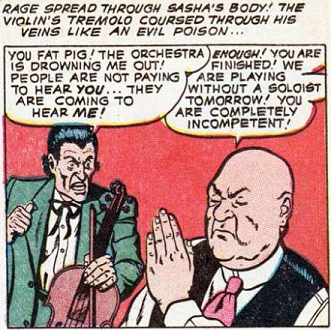 Conductor of Chicago's Gebau Symphony Society from the "Curse of the Condemned Gypsy" story in comic book Baffling Mysteries #22 (September 1954).

His ego is such that he gets rid of his soloist at rehearsal even though the whole symphony seems to have only a half dozen members.

Unfortunately for Wildmach, his soloist Sasha Karensky has been playing the cursed violin of Romany fiddler Gyori Misklova, who was hanged in 1527. After an argument, Karensky hits Wildmach with a music stand and he dies.