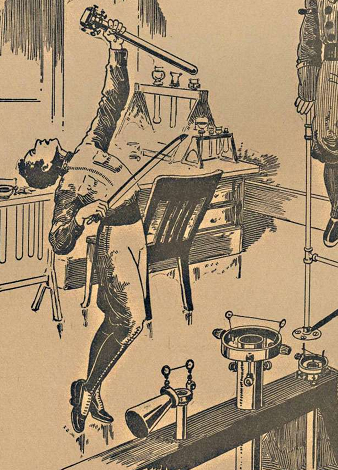 Musical weapon invented by the father-son team of Feodore Kelinev and Josef Kelinev in the short story "The Singing Weapon" from science fiction magazine Amazing Stories vol.2, no.2 (May 1927). A stringed pseudo-musical instrument with a brass resonating chamber, it works by sympathetic vibration.

It comes in handy when the United Asiatic nations declare war on the U.S., and gas-bomb San Francisco. The Kelinevs develop their Vibranon and convince the U.S. Secretary of War of their invention's effectiveness. The government builds larger ones, and Josef uses a plane mounted Vibranon to sink three enemy aircraft carriers off Sandy Hook, NY.

Josef keeps experimenting to develop a Vibranon that can kill people directly, and tests it on an enemy corpse. Ew. Unfortunately, when it works, Josef is paralyzed and killed by his own invention.

The model Josef had constructed consisted essentially of a thin piece of brass tubing, about two feet long, with one end closed. Over the open end was arranged a bridge and peg mechanism which would hold at any degree of tautness a thin wire string similar to that of a mandolin. The string when set in motion by a bow, would set up vibrations of the column of air in the tube sending out any given number of vibrations a second into the air.