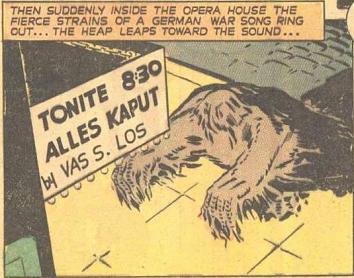 Unseen fictional German composer of the opera Alles Kaput on the marquee of the Lawndale Opera House in the Heap story in comic book Airboy Comics v4 4 [39] (May 1947).

The opera and composer are joke names; in German, "alles kaput" means "everything broken" or "all ruined" and "was es los" is a question meaning "what's up?" or "what's going on?"

The opera performance is rudely interrupted by hideous creature the Heap, part WWI German flying ace and part swamp muck, attracted by the sound of German singing. He's been chasing fleeing mobster Paul Lustig, who's ducked in the opera house to hide. The Heap catches Lustig and squeezes him, trying to get singing to come out, but crushes him to death instead, and goes back to the swamp.