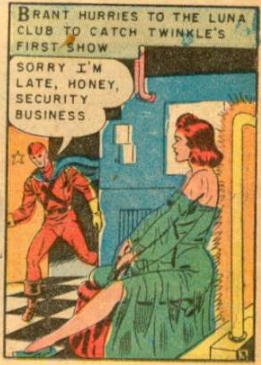 Feisty, red-headed singer at the Luna Club on planet Saturn, and Brant Craig's jealous girlfriend in the "The Case of the Racing Grellama" story of science fiction comic book Fantastic #8 (February 1952). Her boyfriend, private detective Brant Craig, loses all their money betting on the grellama races, Saturn's native greyhound-looking dog-things. He gets involved with grellama owner Nola Paxton after her grellama trainer is mysteriously murdered. Turns out Paxton sabotaged her own dog and bet against him, and murdered the trainer herself. Starr clonks Paxton on the head before she can murder them with her atomo gun. Starr also helps herself to Paxton's winnings before the cops show up!

While Brant Craig was a regular feature of the Captain Science comic book series, this girlfriend only appeared in this story.