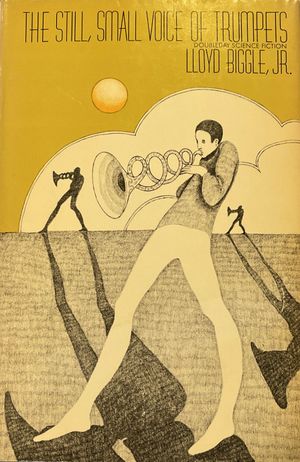 Skilled, respected musician of the alien planet Gurnil, from the 1968 science fiction novel The Still, Small Voice of Trumpets by Lloyd Biggle, Jr. He is master of the torril. Unfortunately, dictatorial King Rovvo orders one of his arms cut off after Tor performs at a king-ordered festival. This stops his playing, but human Cultural Survey agent Forzon helps him by inventing a valveless trumpet he can play. The Gurnilians never invented brass instruments. Tor takes to the new instrument, inventing a notation system for it, and a new scale. The one-armed village Tor has been exiled to produces lots of trumpets and Tor teaches a lot of students. This all helps kick-start a cultural and democratic revolution against the king.

"They call him Tor," Ultman whispered, when the noise had subsided. "Meaning that he's practically synonymous with his instrument. He's the best, and he's a relatively young man."

Tor seated himself facing the torril and encircled the strings with his hands. Watching intently, Forzon made a discovery. The height of a torril matched the musician's height, but the size of the globular sounding medium matched his skill. The larger the globe, the greater the number of strings that could be attached to its circumference, and the greater the instrument's range and it's demands on the performer.

Tor's instrument had an enormous globe, and the tone, from the booming bass strings to the bell-like trebles, possessed an enriched resonance that made the simple instruments played in taverns sound like toys by comparison. With hands that scarcely seemed to move he brought forth notes with unbelievable rapidity. The music sang joyfully, sank to a muted lament, whispered of songful beauty, and crescendoed to a brilliantly martial conclusion. The audience sprang to its feet to stomp and cheer, Forzon with it. "I've never heard anything like that," he confided to Ultman, when the tumult had died down. Tor was beginning another number. The rippling, surging onslaught on the strings commenced low and gradually moved through the whole range of the instrument in looping patterns of sound. It halted with such shattering suddenness that the ear disbelieved and trustfully searched the silence for the vanished music. Tor got to his feet and stood facing the house's central window, head bowed.