From the 1906 young adult novel John Dough and the Cherub by L. Frank Baum. A "fluffy-haired" composer, pianist, and one of the many odd inhabitants of the Isle of Phreex.

John Dough and the Cherub was not originally an Oz novel, but John Dough and Chick the Cherub show up in the Emerald City of Oz for Princess Ozma's birthday in The Road to Oz (1909. In the 1914 Oz novel, Tik-Tok of Oz, Baum put a map he made showing Oz surrounded by other lands he had set some of his other works in, unifying them into a single universe, including the Isle of Phreex. 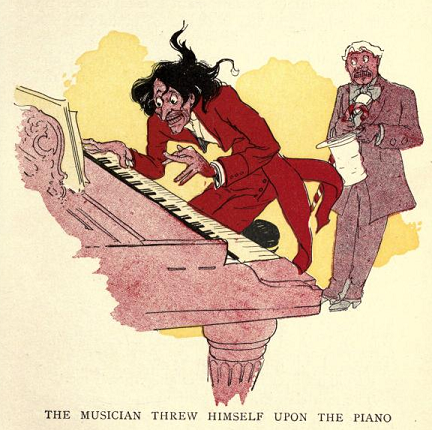 As he walked along he heard the sound of a piano, and paused at an open door to peer within

the room, for he imagined some one was pounding upon the keys of the piano with a sledge-hammer.

But immediately a fluffy-haired man looked up and saw him, and the next instant pounced upon the gingerbread man in much the same way that a cat would pounce upon a rat, and seized him fast, drew him into the room, and closed and locked the door.

John was astonished, but the fluffy-haired musician began pacing up and down the room, swinging his arms and shouting:

" I have it I I have it at last! I am great! I am magnificent! I am better than Vogner himself!' He paused to glare upon John. "Why don't you shout, you baked idiot? Why don't you weep with joy?' he cried. "It is great, I tell you! It is great!'

"What is great?" asked John.

"The symphonie! The divine symphonie, you heartless molasses-cake, or devil's food, or whatever you are! And I composed it- I- Tietjamus Toips ! I am greater than Vogner!'

"I didn't hear it," said the gingerbread man.

The musician threw himself upon the piano, and produced a succession of such remarkable sounds that John was surprised.

"Did you understand it?" demanded the fluffy-haired one, jumping up again.

The musician threw himself upon his knees and burst into tears.

"Thank you, my friend! my dear friend!" said he, between the sobs. "Such praise gladdens my heart and makes me very happy! Ah! glorious moment, in which I produce music that is not understood and sounds like discord!"

John left the musician still shedding tears of happiness, and walked to his room.

"The people of this island are certainly peculiar," he reflected; "and I am very glad indeed that I am an ordinary gingerbread man, and not a crank."

The name is a pun on "Pajama Tops" and Baum's composer, Paul Tietjens, who wrote music for the stage musical versions of the Oz stories.