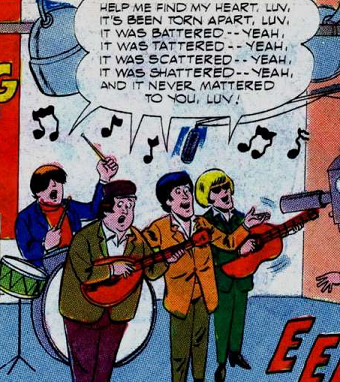 Britsh folk rock quartet in Brooklyn. Semi-regulars in the Charlton comic book series, Go-Go (June 1966 - October 1967). They first appeared in issue #1 (June 1966). In issue #5 (February 1967), their big hit is "Wailin' Welfare Blues #69!" Every older white male involved with them from their manager to the recording engineer thinks they're so horrible, they have to be a hit. And they are! Sort of satirical, with all the subtlety of brass knuckles.

Their name is a parody of The Rolling Stones.