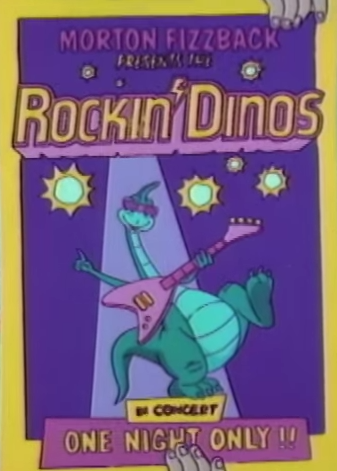 From the animated television series Denver the Last Dinosaur. In the pilot episode, a bunch of kids find an giant egg that suddenly hatches a mute, comic-relief dinosaur that they decide to keep and name "Denver." Passing evil concert promoter Morton Fizzback just happens to witness the event and decides to kidnap Denver and use him as a gimmick to front this band he apparently threw together quickly. Denver takes to being a rock star (temporarily), even doing Chuck Berry's duck walk move, before his multi-culti pals rescue him.

So this band performs exactly once.

Weirdly, the song they sing is the show's theme song.