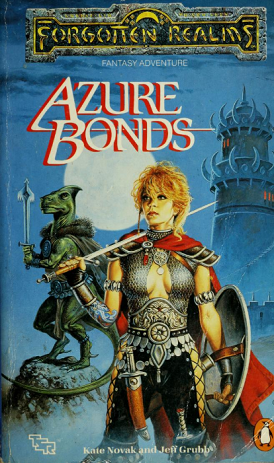 Bard originally named Finder Wyvernspur, from the 1988 Dungeons and Dragons Forgotten Realms novel Azure Bonds by Kate Novak and Jeff Grubb. Obsessed with finding a way to record music perfectly, he delved into dangerous, unethical experiments in creating a magical clone of himself that led to the death of two apprentices. He was exiled into a different plane of existence and all his songs and history erased. Centuries later, a sorceress freed him, and they did some quest-type stuff with Olive Ruskettle. This culminated in him killing the evil deity Moander and claiming its godly essence as his own, thus becoming a deity himself, albeit a low-ranking one. For his deeds, his reputation and songs were restored.

In a later novel he recruited the human bard Joel as his first human cleric.

“Because I am a bard. The Nameless Bard.”

“The Nameless Bard? Just what's that supposed to mean?"

“It means they took away my name. In much the same way that barbarian kings wipe out the wives and children of their enemies, they banned my songs and erased my name from history—and from my own mind.”