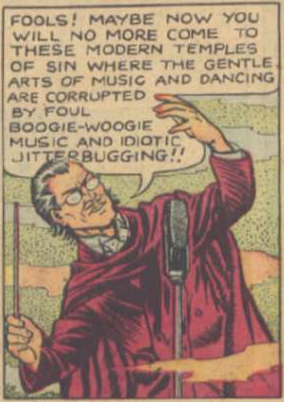 Longhair classical music-themed villain from the Swing Sisson story in Feature Comics #54 (March 1942). He has a baton rigged up to spray sleeping gas to put club crowds to sleep and steal all their valuables. He has given himself an injection of antidote so he's not affected. The baton is also a stiletto. And he has a gun, also.

He hates, HATES swing music. He plans to steal enough to open his own night club with symphony orchestras and old fashioned dances. Swing Sisson and his pals track him down and beat him up.

In issue #68 (June 1943), the Maestro's been in jail for a year and breaks out by stumbling onto a hypnotic method of playing his violin. His first act (after getting a new tuxedo and opera cape, of course) is to crash Sisson's Clover Club gig and force everyone to dance to death with his hypnotic playing. This doesn't work and when he flees in a car, he crashes and maybe burns to death, maybe not.

Written and drawn by Phil Martin.