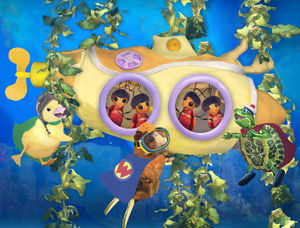 Beatles spoof from the Nick Jr. animated children's TV series Wonder Pets!. Main characters/superheroes Linny, Tuck, and Ming-Ming go to Liverpool to save this quartet of British insects when their Yellowish Submarine gets stuck in Kelp! and is in need of Fixing A Hole. Beatles references abound in the "Save the Beetles/3 Wonders Pets and a Baby" episode (22 April 2008).

Lenie Colacino, a star of Broadway's late-1970s musical "Beatlemania," is the voice of Wingo, Jack and Pete. Greg was voiced by Tom Teeley, another Beatlemania veteran.