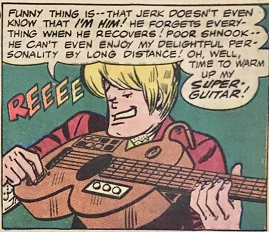 The guitar-playing superhero alter-ego of super-square teen Tadwallader Jutefruce, in the comic book series The Adventures of Bob Hope. Yes, comedian Bob Hope had his own DC comic book. In the "Super-Hip, the Sickest Super-Hero of 'Em All" story of issue #95 (October-November 1965), he's babysitting an old college buddy's teenage son, Tad. When Tad gets bullied by a couple of locals enough, his rage unlocks his alter-ego, Super-Hip. It's sorta Dr. Jeckyll-and-Mr.-Hyde-style, as Tad never remembers being Super-Hip, but Super-Hip remembers being Tad.

Inexplicably, Super-Hip has a super guitar from nowhere. Super-Hip's powers are weird. He can turn his body into giant versions of household appliances, which is creepy-looking. He turns into a giant electric razor, ice-cream scoop, can of whipped cream, electric fan, and a vacuum cleaner.

He visits the Cafe Go-Go-Ghoul and sings, using a beam from his super guitar to make people dance.