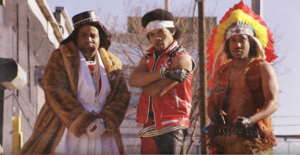 Side note: In the same episode, Chance, Thompson, and Redd also appeared as another fake band.