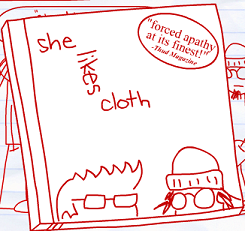 Later, they appear on the soundtrack of Pom Pom's indie film city (comma) state, and have a song used in a car commercial.