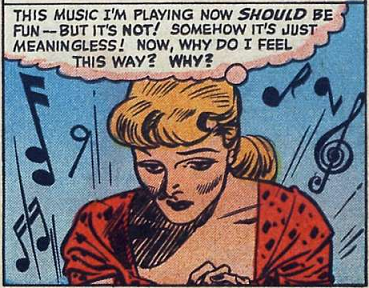 An orphan raised by her penny-pinching spinster aunt who makes her do piece-work, Ruth decides to spend her meager allowance on piano lessons. She finds local piano teacher and borderline psycho Derek Masters, who's super-strict and a real jerk about everything. He loves real pianist Rubenstein, and takes Ruth to see him. But Derek stares so intently at him, it weirds her out.

When her miserly aunt takes away her allowance, Masters teaches Andrews for free, but doesn't get any nicer.

Eventually Ruth gets away from Derek and dates normal boy Bob Simmons and even tries playing the piano for fun! But it just isn't the same without Derek's cold, angry screeching, and she realizes she loves Derek and leaves Bob. What. No, seriously, that's the script. It's just not right. When Ruth confides her love to Derek, she sees his beautiful "Ode to Ruth" he's been composing. Then he confides his love for her and suddenly morphs into a normal human being.

The postscript says he's one of America's most promising composers, thanks to "Ode to Ruth," and that she plays his music.