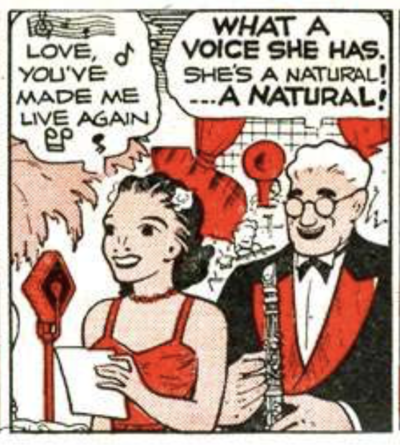 Swing bandleader and clarinetist from the Dick Tracy comic strip. He first appeared March of 1940 (the strips were also reprinted in comic book form by Dell, as Four Color Comic #56, 1944. He resembles real bandleader Benny Goodman.

Dick Tracy takes an amnesia victim he found to Cafe Rhumba, where Seton ("notes" spelled backwards), Tracy's old friend, is the orchestra leader. When Seton plays, little miss amnesia just steps up to the mic and starts singing. Seton is impressed, calling her a "natural." Tracy dubs her "Mary X." Seton gives her a job, new clothes, and puts her on his radio show, where they ask people who recognize her voice to contact the station.

Mary X gets her memory back and turns out to be a witness to murder. Her boss Mason murdered his partner Freez. Confronted, Mason pulls a gun, but is mysteriously shot. Turns out it was mobster Junky Doolb ("blood" backwards), who tried to frame Seton for the murder. Tracy arrests Seton as part of a plan to flush out the real killer. Doolb is set up by one of his own men, dwarf Jerome Trohs ("short" backwards), and killed by the cops, as part of Trohs' plan to take over the gang.