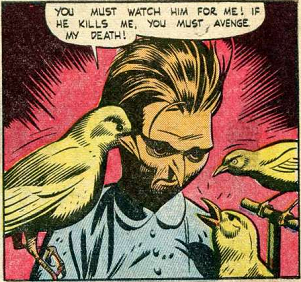 Singer from the "Day of Reckoning!" story of comic book Adventures into Darkness #5 (August 1952). She's sung her way to fame and wealth. She earned the nickname "the bird girl" because she sang like a bird. Unfortunately, her disfigurements after being badly burned also gave her the face of bird.

She's married to Larry Gordon, who only married her for her fame. After the accident, she becomes a recluse, only hanging out with real birds. Larry wants a divorce so he can marry Rosalinde's friend Virginia, but she won't give it to him. Virginia talks Larry into smothering Rosalinde with a pillow, making it look like her heart just gave out.

On their way from the graveyard, Larry and Virginia stop to change a flat tire on a high cliff side, and Rosalinde's bird friends attack them, causing them to fall to their deaths.