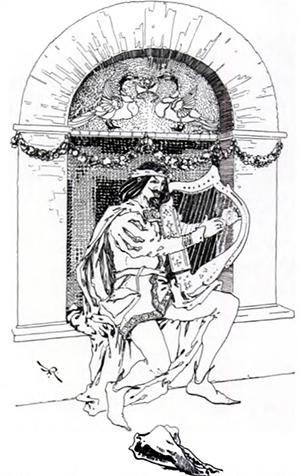 A wandering Medieval-style minstrel and harpist from Queen Zixi of Ix, a fantasy novel by L. Frank Baum, 1905. He also "...sang of the things he had seen in other lands, thus serving his hearers with the news of the day as well as pleasing them with his music." He sings about a magic cloak to Queen Zixi, who then desires to possess it, kickstarting the plot.

Queen Zixi of Ix was not originally an Oz novel, but in the 1914 Oz novel, Tik-Tok of Oz, Baum put a map he made showing Oz surrounded by other lands he had set some of his other works in, unifying them into a single universe.

A 1914 silent film adaptation of the novel was made, with Vivian Reed playing Quavo.