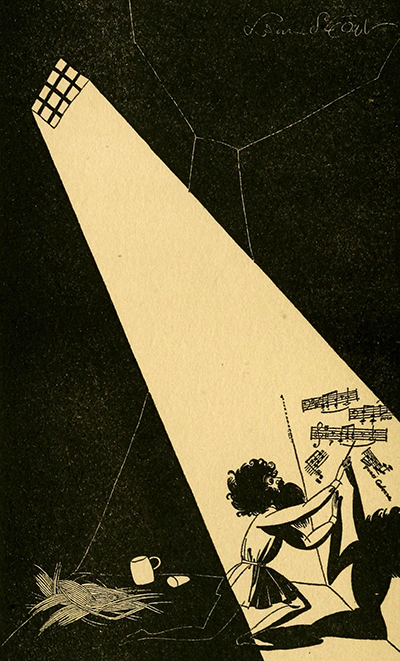 Parody of Russian composers in a short comedy piece called "Those Symphony Concert Programs" by Lawton MacKall, published in The Century Magazine in 1914. When the piece was republished in a 1922 compilation of his work, there was a new illustration (right) by Lauren Stout.

I. Gastronomic Symphony, It is not certain when Ptior Kovik-Bordunov was born. His parents, being thrifty peasants, put him in a basket and left him on the steppes of Russia. Adopted by a Russian Princess, named Caviar Vodka, he was raised as if he had been her own dog. His early musical inclination was so pronounced that he was sent to the Warsaw Conservatory, where he served three terms. Soon after being released from this institution he wrote Samovar, the opera that made him famous. Samovar so pleased the Czar that young Bordunov was given a pension and a bath. But alas! either his sudden success or the bath so affected his mind, that from that time on the authorities were obliged to keep him in confinement. The above symphony was written on the walls of his cell, from which it was transcribed after his suicide. It depicts the blight of all his hopes, the sorrows of Russia, the drowning of his fiancee, the height of the steppes, and the agonies of indigestion. The Allegretti opens with an arabesque tone-poem of somber sweetness, under which strange and varied delights are hidden. Then comes the minor Pistachio, weirdly oriental in color. This is followed by the tempestuous and maddening Chianti. Last of all comes the terrible Risotto, con aglio. Here we have an example of the insight of genius! By itself, the Risotto con aglio would be almost mild ; but coming as it does on top of the Allegretti, the Pistachio, and the Chianti, it is bound to produce a truly tragic finale.

"Bordunov" is a play on words that sounds like "bored enough."