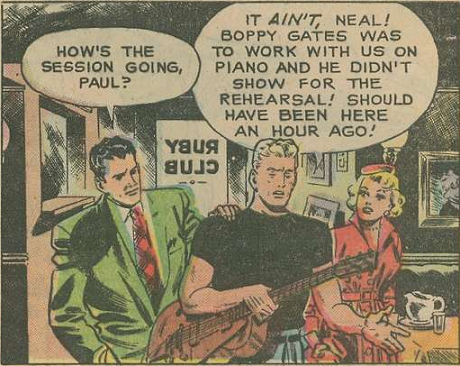 Super-buff blonde guitarist and headliner at the small Ruby Club in the "Melody of Hate" story of Charlton comic book Strange Suspense Stories #27 (Oct 1955). His trio (an unnamed bassist and drummer are shown in the background) is playing there, with support from pianist Boppy Gates and singer Avalon Ayres.

His pal, songwriter Neal Valentine, comes by when Paul is wondering where the hell his pianist, Boppy Gates, is. Then Boppy stumbles in, soaking wet, saying "I was thrown into the river and left for drowned!" and announces he's out of the band and exits. The trio's singer, Avalon Ayres, is crazy about Boppy and totally distraught, so Neal volunteers to find out what's going on.

Turns out Boppy and another musician, Riverboat Davis, were threatened by song publisher Harry Jefferson, the uncle of Neal's fiance. Davis and Gates knew the truth that Jefferson stole the fortune left by his brother to finance his music business. Jill was about to find out since her 21st birthday was coming up. Valentine saves Jill from Jefferson just in time, and Jefferson confesses and prepares for jail.