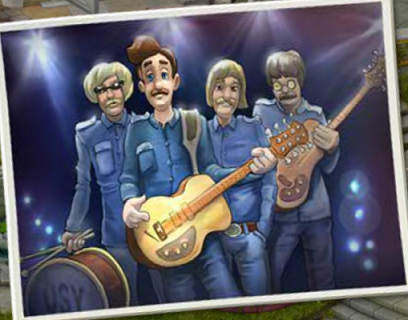 In Gardenscapes 2 (first released by Playrix in August 2013), he's visiting his parents Olivia and William. An old letter from "John" arrives, with a picture of Austin when he was much younger and in this band. The band looks like a standard guitar/bass/drums rock quartet, only with a sort-of Sgt. Pepper's Lonely Hearts Club Band-type image. The bass drum skin reads "OSY" but we're not informed what that stands for, if anything.

Austin recalls they played three whole gigs! And narrowly missed a contract with a major studio. They had a "hit" lined up, "The Ballad of the Garden Olde." But they wanted to change it to "The Salad of the Garden Cold" and Austin wouldn't hear of it.

Austin's last name is never given.