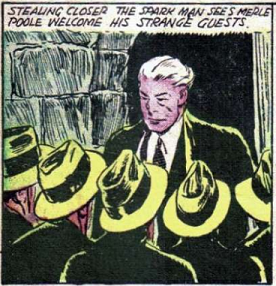 "Eccentric composer" and violinist with a huge mansion from the "Case of the Gold Crow" story of comic book Sparkler Comics #3 (September 1941) , published by Frances M. McQueeny.

Violinist Omar Kavak (secretly superhero The Spark Man) speculates with co-musician Alex Grant that a recent string of thirty-one (!) mysterious murders must be done by a musician. Each victim is lured to their window by the "haunting melody" of "The Song of the Crow," then killed by a thrown knife with a gold crow on the handle.

When Kavak is nearly killed the same way that night, he transforms into Spark Man and investigates Poole's mansion. He stumbles onto a bizarre scene: Poole inviting a group of masked men into his house before a gold, crow-shaped throne. Playing "The Song of the Crow," there is a burst of light and smoke, and he seemingly has summoned Ita, the goddess of death!? She accepts an "offering" (gold) from the men (criminals) who want a certain judge Ashton killed. The Spark Man prevents a sniper from shooting Ashton, and rushes back to the mansion to defeat the criminals and tie up Poole and his female accomplice and leave then for District Attorney Dillion.

Written by Fred Methot and drawn by Reg Greenwood.