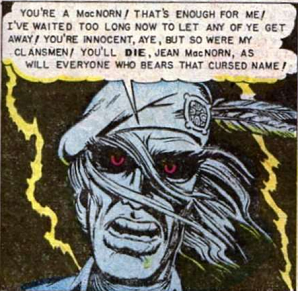 Scottish bagpiper of Clan Glowry from hundreds of years ago, from the "Curse of the Midnight Piper" story of horror comic book The Beyond (October 1952).

A passing historian, Bruce Glowry, helpfully explains the bloody history of Castle MacNorn, which used to be Castle Glowry. After weeks of fighting between the MacNorns and Glowrys, Malcolm (a "fine swordsmen") was the only Glowry left. Rather than lose any more men to Malcolm, the head of the MacNorn clan walls up Malcolm in a passageway to starve to death. Bloody Angus MacNorn, aka the Black Duke, (so evil he gets TWO nicknames!), thinks his victory is complete. But Malcolm vows vengeance and:

As Malcolm starved, he played his pipes, and long after he was dead, the eerie music seemed to float through the castle at midnight. Finally it drove Bloody Angus mad! Before he went to his premature death, he left orders that the sealed doors must never be re-opened, for if they were, death would come to those in the castle and in the neighboring village!

Sleazy cousin Duncan has to prove everyone wrong, and breaks open the passageway and finds Malcolm's skeletal remains. And also releases his ghost to wake the ghosts of his dead comrades to attack all the MacNorns in the nearby village. Fortunately, the villagers figure out the ghosts are vulnerable to light, and use torches to drive Malcolm back into his passageway and seal it up again.