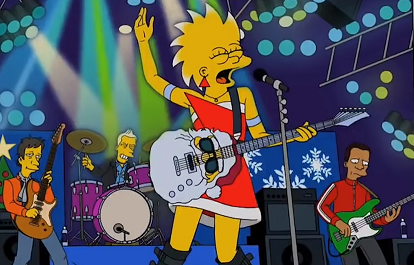 The "Holidays of Future Passed" episode (first aired 11 Dec. 2011) of long-running animated Fox comedy television series The Simpsons is set in the future. Baby Maggie is now all grown up and a rock star, "the voice of her generation." In a later episode ("Whistler's Father," first aired 15 Oct. 2017) Maggie learns to whistle and Homer tries to make her a star.

Is that all of them now? Has every member of the Simpsons family been a musician/singer of some kind, in some form, in some episode? If we count "Treehouse of Horror" episodes, then I think so! Mission accomplished!