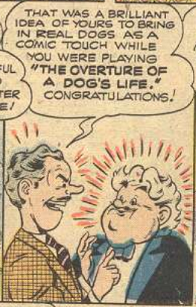 High schooler/main character Ozzie Turner hates playing the flute, but his dad insists because three generations of Turners have played the flute. Dad Turner has a prized flute given to him by Maestro Pagalini, who let him play once in his Philharmonic Orchestra when he went through town.

Turner tries several time to "lose" the flute but it comes back each time. Infuriated, he finally breaks it and stuffs the bits down the sewer. But just then, Pagalini phones his dad out of the blue to come play in his orchestra once more. Ozzie has to borrow a flute from teen rival Slick. But Slick hides a dog whistle in the flute, and when dad Turner plays it, dozens of dogs crash the concert, leading to Pagalini chasing dad, and dad strangling Ozzie. But then the real hero of the story, a music critic for the Daily Herald, breaks it up by telling Pagalini how brilliant is was to bring in real dogs while playing The Overture of a Dog's Life. Pagalini takes the credit, Pagalini forgives dad, dad forgives Ozzie, and Ozzie doesn't have to play the flute anymore.