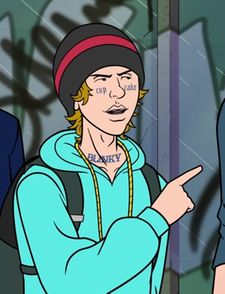 Young mumble rapper star from "The Mystery of the Mumbling Rapper" episode of the Dicktown segments of the Cake comedy programming block on the FXX network.

Dicktown was created and written by John Hodgman and David Rees, and they voice versions of themselves that are two middle-aged detectives that solve teen mysteries. In this instance, where did Lil Blurp's missing ocelots go.

They get involved when it turns out John's super nice dad (voiced by Stephen Tobolowsky) has turned into a rap mogul in his retirement years.