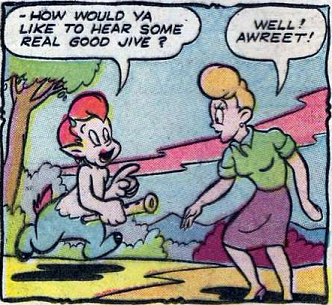 His dad is the god Pan. Li'l Pan plays a recorder-looking wind instrument instead of pipes (properly, a syrinx). He spends two of his three issues on an around-the-world hunt to find dad's famous pipes which he lost.

His earliest appearance was in Zoot Comics #4 (November-December 1946).