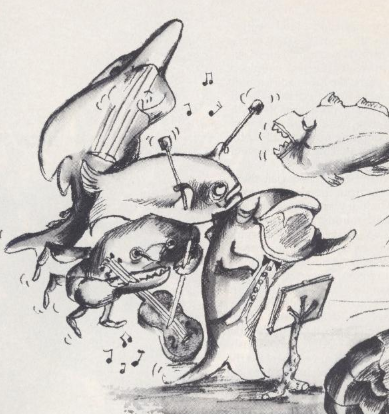 Lawrence Whelk, illustration by Anita Schettino. Yes, yes, I can see that it's a fish and not a snail at all. Please don't email me about it.

The joke's got to have been around for some time, but the earliest use I can find is 1989, from the pun-stuffed, noir parody short story "Gone Fission," by Gary Gentile, in the Fall 1989 issue of SCUBAPRO Diving and Snorkeling magazine.

Just then the band struck up a number. It was a sea chantey. According to the playbill on the drum fish, the lead sinker was a gastropod named Lawrence Whelk. He was accompanied by a quick picking guitarfish, a fiddler crab whose apron was on crooked, and a striped bass who was actually a tenor.

They played a lively tuna.

The joke was part of the title of a 1997 art print by Carol Lummus: "Saturday Night with Lawrence Whelk."

Cartoonist Dan Piraro used the gag in his Bizarro comic strip of Feb. 5, 2013.