Larry Lake and His Band 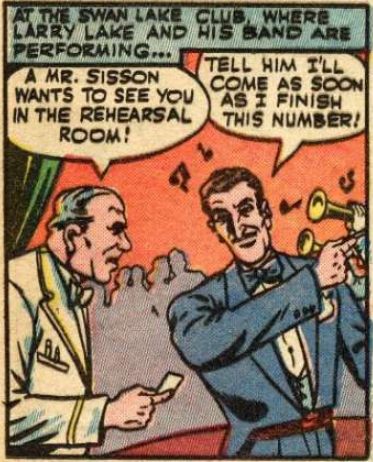 Bandleader Sisson is threatened by blackmailer "The Musician" not to play the club, it's Larry's gig. On his way there, goons run Sisson's tour bus off the road, causing the death of their driver. The Musician also trashes their instruments, so they can't play. Sisson thinks bandleader Lake is in cahoots with the blackmailer and threatens him. In a later confrontation, Lake accidentally kills himself trying to throw suspicion away from himself, because he WAS The Musician. Sisson explains it all to the police.

Written and drawn by Vernon Henkel.