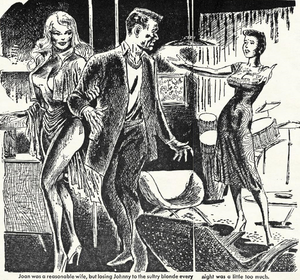 Amateur drummer from the short story "Drumbeat" by Adam Chase, appearing in the April 1958 Fantastic magazine. When he drums, a mysterious incubus named Bebe appears and takes him away on a jaunt through time and space, much to the dismay of Johnny's wife Joan.

When he gets stranded with H.G. Wells, Franz Joseph Haydn, and a caveman named Ungo-par, they team up to write a musical comedy version of Wells' Time Machine that earns them their freedom (?!).