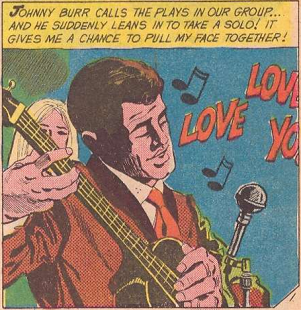 Guitarist from the "Sorrow Song" story of romance comic book Career Girl Romances #40 (Jun 1967). He's in an unnamed rock and roll trio with singer Lauri and drummer Vic Anson. Anson's engaged to Lauri, but he's a cad and a heel, seeing other girls on the side.

Supportive, nice-guy Johnny urges her to finally break up with Vic, especially as Johnny is leaving the band anyway. She does, moves away, and gets an office job. Lauri thinks that Johnny must be out of the entertainment business. After a mysteriously prolonged delay ("I was away."), Johnny tracks her down later and they hook up.