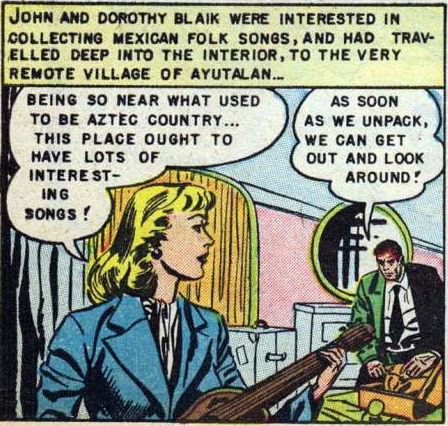 Musicians and folk song collectors in the "Song of the Undead!" story of horror comic book Eerie #8 (August-September 1952). They travel deep into Mexico, into former Aztec country, to the remote village of Ayultalan. A strange vampire woman named Xatl teaches them the "Song of the Undead." Apparently, you're safe from vampires in this region unless you sing this song.

So of course Dorothy sings it, and John finds her dead. Desperate, he sings the song to her, thinking it will bring her back from the dead. Which it totally does! Awesome! But she comes back a vampire and kills him! Bummer! Then the villagers find them both dead and bury them. Wait, why isn't Dorothy still a vampire like Xatl?