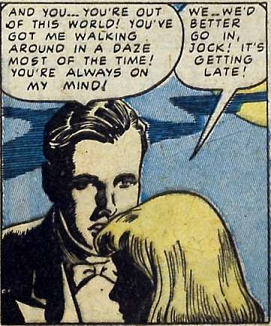 Bandleader from the romance comic book Love Diary #2 (October 1949). He leads the band at the upscale Green Meadows Inn, where social climber Laurie Brownell has scrimped, saved, and snubbed her low-class friends in order to spend the summer. She lies and says she's an heiress and mingles with the wealthy set.

After a while, she's really fallen in love with Jock, but she can't decide whether to go with him, or wealthy socialite Ted Carter, both of whom are interested in her.

Unfortunately, her ex-boyfriend's chum Joe Nelson is the cornet player in Jock's band, and recognizes her. He hates phonies, and warns her to stay away from Jock.

It being a romance comic, it all works out, and Laurie ends up with Jock.