Jitterbug Juba and his Jungle Band 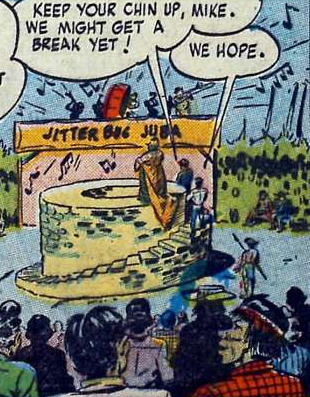 Aztec...swing band?! Yep, from the "Lance O'Casey and the Jungle Jive Cats" story of comic book Lance O'Casey #3 (Fall 1946). Sailor/adventurer Lance and his pal Mike Bellew are shipwrecked on a beach somewhere in Central America and taken prisoner by natives who speak in swing music slang and dress in zoot suits!

They are taken to their village of Swingaroo, where a sign (in English) shows this band is playing. Turns out the representative of their Sun God Xapotyl is really an American circus barker named Phineas X. Maguire, the only survivor of his circus' plane crash. He taught the natives English and introduced them to swing music.

Jitterbug Juba and co. also play at O'Casey's and Bellew's sacrifice, but when they're thrown down the sacred well, there's a net to catch them that Maguire rigged up. Maguire has Xapotyl "resurrect" the men, and Maguire sees them off on their schooner Starfish.