Honey and the Bear 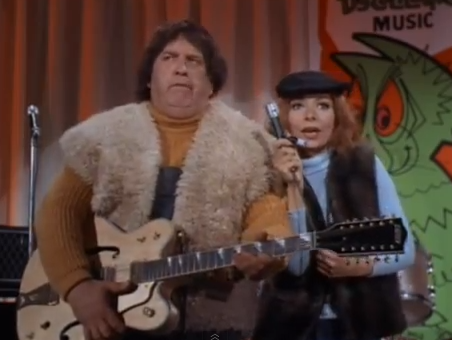 In the "The Spy Who Came In From The Cool" episode (10/10/1966) of comedy television series The Monkees, a pair of Rooski spies are after microfilm hidden in a pair of red maracas that Davy Jones mistakenly ended up with.

The spies, femme fatale Madame (Arlene Martel) and her beefy underling Boris (Jacques Aubuchon), dress up as hipsters to infiltrate the club where the Monkees are playing and pull a hidden gun on them after their song ends. Quick thinking Mike Nesmith introduces them to the audience as the folk protest duo "Honey and the Bear." Faced with an expectant crowd, they sing "Blow up the Senate" to a cavalcade of boos while The Monkees beat a hasty getaway.