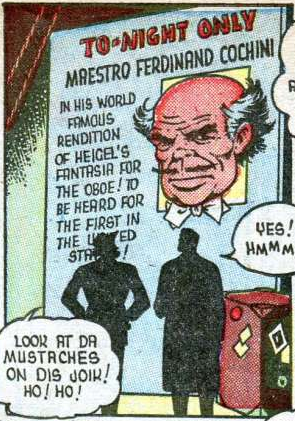 Classical composer from the story "The Man Who Played the Oboe!" in the Anglo-American comic book Grand Slam Three Aces Comics #47 (October 1945). He composed a Fantasia for the Oboe so difficult to play, it has only been attempted twice in the U.S. in 15 years. The first was Ferdinand Cochini, 15 years ago (so, 1930). The second, Alberti, was murdered by Cochini after completing it. Hero Dr. Destine and his sidekick Rugged solve the case.

The piece climaxes with a lot of crashing cymbals and kettle drums, which hid the noise of the gunshot that killed Alberti.

Cochini made a popular recording of the piece. Alberti was planning on recording it also, but was murdered before he could do it.

Heigel's first name is never given.