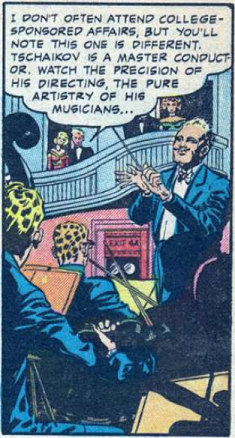 Pianist and college student at State U. from the "You're All I Ever Wanted" story of comic book Campus Romance #3 (February-March 1950). He's part of a college show where he meets Jane, and helps her rehearse her singing for the show. They date until she jilts him for another. After graduation, they lose track until She sees an article that says he's a big success on the west coast with his own orchestra, playing large clubs and hotels, and has a show on a California radio station. He's coming to NYC for a four week engagement at the Paramount. They reconnect, but then he has to go back to Los Angeles to be in a film. She decides to abandon her rising career to be his wife.